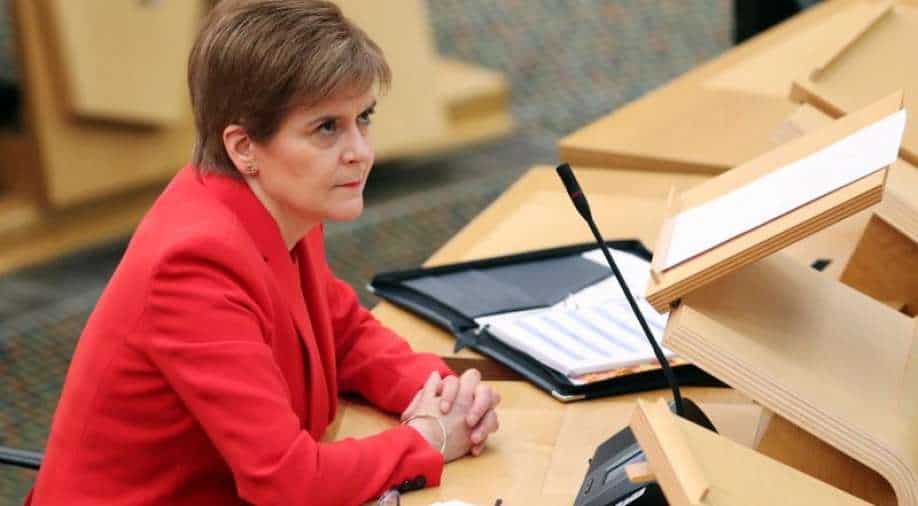 “Freedom Day” means something different north of the English border, so it was perhaps not surprising that independence-minded Scotland declined to fall in line earlier this week when British Prime Minister Boris Johnson lifted virtually all remaining coronavirus restrictions in England.

While Scottish authorities did follow England in relaxing curbs — the British tabloids proclaimed it “Freedom Day” — nightclubs in Edinburgh and other cities remain closed, face masks are compulsory in pubs and shops, and the government has told people to stay 1 meter apart from one another and keep working from home.

It is the latest example of a divergence that stretches back to the start of the pandemic. Scotland’s nationalist leader, Nicola Sturgeon, a politician whose rallying cry is freedom from the United Kingdom, has frequently taken a more cautious, deliberate approach to the virus than the more freewheeling Johnson.

This time, though, it may prove to be a decisive fork in the road.

England is embarking on a high-stakes gamble that it has vaccinated enough of its adult population that it can fully open its economy, even if that means withstanding a huge new wave of infections. Scotland, with a comparable level of vaccinations, is not yet ready to throw off its last protections.

“To talk of tomorrow as ‘Freedom Day’ is not sensible,” said Sturgeon, who is first minister and leader of the Scottish National Party, before England’s big easing Monday. The phrase, she said pointedly, applied to England, not Scotland.

The differences between Scotland’s and England’s pandemic responses, experts note, are often more in tone than substance. On major policies such as lockdowns and vaccines, the two have been generally aligned. And judged by metrics such as cases and deaths, their performance has not been all that different.

Still, in a relationship in which so much is refracted through the prism of Scottish nationalism, Sturgeon’s conservative stance could pay off politically, especially if Johnson’s experiment backfires.

“If it goes pear-shaped and Scotland ends up in a better position, expect those in the independence movement to have something to say about it,” said John Curtice, an expert in polling at the University of Strathclyde.

Pandemic politics, he noted, can be fickle. Last July, when cases and deaths in Scotland dwindled to a trickle while England was being ravaged, support for independence spiked to 55% as people concluded that Scotland could fare better on its own.

But over the winter, as Scotland faced a renewed surge in infections and the British government secured vaccines and distributed them aggressively across the United Kingdom, enthusiasm for independence waned.

With Scotland now recovering from yet another outbreak, polls show that support for independence has slipped below 50%. That is about where it was in 2014, when Scots voted against leaving the United Kingdom.

Although the Scottish National Party kept control of the country’s Parliament in recent elections, it fell one seat short of a clear majority, taking some of the wind out of the movement. Sturgeon has signaled that she wants to get past the pandemic before pushing for a second referendum.

The mood in Edinburgh, which is gearing up for its annual arts festival next month, is more subdued than in liberated London. While the festival is going ahead, the number of live shows has been scaled back or placed online because of social distancing requirements.

Tourists, many of them from other parts of Britain, filled tables this week outside pubs and restaurants near Edinburgh’s Royal Mile. But pub owners say the restrictions, particularly on face masks and midnight closings, are hindering them from rebuilding their businesses.

“There’s no justification for us being any different than England,” said Nic Wood, owner of 22 pubs in Edinburgh and other cities. “England is challenging it head-on, while Scotland is still shying away.”

Scotland’s authorities were alarmed by a sudden surge in cases in June, when the highly transmissible delta variant spread across the country. There are a variety of theories about why it was so prolific — not least that thousands of fans of Scotland’s national soccer team traveled to London for a game against England and brought the variant back with them.

Scotland, experts said, also had an initially slower rollout of vaccines than England and a lower level of antibodies in its population, which could have played a part. While cases have begun dropping again, the outbreak punctured illusions that Scotland was different from its neighbor to the south.

“COVID has been a double-edged sword for the government,” said Ian Murray, who is the Labour Party’s sole member of the British Parliament from Scotland and opposes independence. “Most Scots are indy-curious, hate the Tory government and think Scotland has no power.

“Now,” Murray said, “they see that Scotland has real power and that the U.K. works pretty well in a crisis.”

That last point is open to debate, given the lurching nature of Johnson’s response to the pandemic. But it is true that Scotland’s handling of the crisis has laid bare its strengths and weaknesses in ways that were less clear beforehand.

Within the United Kingdom, Scottish authorities are responsible for matters such as health and education, while the British Parliament handles immigration, foreign policy and — crucially, at a time like this — fiscal policy.

This arrangement has led to tensions on issues large and small. Scottish officials protested when the London North Eastern Railway scrapped social distancing requirements on its trains, even after they crossed into Scotland.

Scotland’s chief medical officer wrote to British authorities this week to urge them to rethink limiting vaccinations of young people ages 12-18 to those with underlying health conditions. The British asserted that because teenagers are resilient to COVID, there was little benefit to vaccinating them.

But the academic year in Scotland starts earlier than in England, and public health experts said they feared that letting unvaccinated children back into classrooms was a recipe for new infections.

“I worry most about the schools,” said Devi Sridhar, head of the global public health program at the University of Edinburgh. “What do we do about the kids? Do we just let them all get it?”

Sridhar, who advises the Scottish government, acknowledges that its handling of the pandemic has not been without setbacks. Last summer, when cases and deaths fell to a handful, Scotland aspired to a zero-COVID strategy like that in New Zealand. It did not work, she said, in part because England did not take similar steps.

Now, though, public health researchers say Scotland may not be far from the threshold for herd immunity, given the percentage of vaccinated people and those who have natural antibodies.

“I was never comfortable with all the emphasis on ‘Freedom Day,’” said Mark Woolhouse, a professor of public health research at the University of Edinburgh. “If a moderate amount of mask-wearing and other mitigation measures gets us over the herd immunity threshold, then why not do it?”