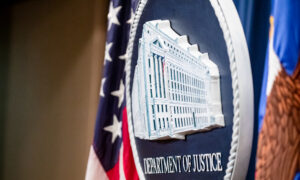 The U.S. Department of Justice indicted nine individuals who allegedly acted as “illegal agents” to intimidate a former Chinese official and his family to return to China.

The charges on July 22 supersede a previous criminal complaint in October last year to include a ninth defendant, Chinese prosecutor Tu Lan who traveled to the United States to direct a harassment campaign and ordered a co-conspirator to wipe evidence.

The Chinese campaign was part of a concerted state-directed effort known as Operation Fox Hunt, which began in 2014 and aims to repatriate Chinese fugitives, including dissidents living in the United States.

The victim, who the Justice Department referred to only as “John Doe #1,” previously served as a Chinese municipal government official before coming to the United States. He, his wife and daughter have lived in New Jersey since 2010.

Around 2012 and 2014, the Chinese regime prompted Interpol, an inter-governmental law enforcement organization, to put both the former official and his wife on a wanted list, known as the “Red Notice.”

The former official was accused of embezzlement and abuse of power, a charge that could lead to a death penalty in China. The charge for his wife was taking bribes, which could incur a maximum punishment of life imprisonment.

From 2016 to 2019, the nine conspirators stalked the former official and his family in New Jersey, including his adult daughter. As part of that the conspirators hired a private detective, defendant Michael McMahon.

The information McMahon obtained about the former official included banking information, license number, and address; and for the wife, he obtained her date of birth, social security number, and international travel records, according to the indictment.

The nine conspirators are also alleged to have plotted to bring the former official’s elderly father in China to the U.S. to convey a threat: that his family in China could suffer serious harm, including imprisonment, unless he returned to China.

To cover up the scheme, Zhu Feng (Johnny Zhu), a U.S. permanent resident and a police officer with the Wuhan Public Security Bureau, prepared false statements for the father, instructing him to tell U.S. border officials that a “tour guide arranged by family members would pick him up” and that he was making the visit at his own expense, when it was all arranged by the defendants.

“[T]he main purpose is to let him persuade [the individual] to surrender,” Tu wrote to Zhu in April 2017.

McMahon that same month allegedly proposed that they “harass” the victim by “[p]ark[ing] outside his home and let him know we are there,” a suggestion Zhu dismissed.

After failing to achieve their goals, Zhu boarded the flight back to China with the father. Before they left, U.S. border and law enforcement officials questioned Zhu about the night vision goggles he carried. Alarmed, Zhu told his partner in the United States to “[d]elete all of our chat record … The sooner the better.”

Following what was an unsuccessful trip, the defendants allegedly began stalking the former official’s daughter. Between April and July 2018, Zhu was reported to have sent unsolicited and derogatory messages about the family to her and her spouse’s Facebook friends.

Two months later, one defendant Zheng Congying, a 25-year-old Chinese citizen and U.S. permanent resident, allegedly pounded on the front door of the family’s New Jersey home, trying initially to force open the door before entering an outdoor deck from the back yard to peer into the home’s windows.

Zheng is accused of then taping a handwritten note in simplified Chinese to the front door. “If you are willing to go back to the mainland and spend 10 years in prison, your wife and children will be all right. That’s the end of this matter!” the message read.

The former official’s sister was imprisoned in China from July 2016 to December 2018 to coerce the man to return. One of his relatives in America, in February 2019, received unsolicited packages purportedly from the sister, containing video files that urged him to “come home” to his parents.

“When parents are alive, you can still call someplace a home; when parents are gone, you can only prepare for your own tomb,” read part of the written text in Chinese in one video, which showcased photos of his parents that, according to the prosecutors, appear staged.

“[N]one of the defendants sought or received approval from U.S. government officials to travel to the United States for the purpose of seeking to repatriate [the victim],” the court document stated.

The nine have been charged with interstate and international stalking, each comes with an up to five year jail term. Two of the defendants, Chinese prosecutor Tu and police officer Zhu, face additional charges of obstruction of justice and conspiracy to obstruct justice, each carry a maximum of a 20-year prison sentence. Acting as an illegal agent could result in a 10-year sentence, while conspiring to do so is five years.

Three defendants: McMahon, a U.S. citizen; Zhu Yong (no relation to Zhu Feng) and Zheng, both permanent U.S. residents, are under custody and due to appear in court at an unspecified date.

The indictment did not mention Jin Hongru, a naturalized U.S. citizen arrested in the superseded 2020 indictment, nor did it make public the name of the ninth defendant. Tu, Zhai, and Zhu Feng remain at large.

“That a prosecutor and police officer not only directed and participated in a criminal scheme on U.S. soil, but then attempted to cover it up, is an affront to justice of the highest order,” said Mark Lesko, Acting Attorney General for National Security at the Justice Department in a Thursday press release.

“The defendants will now face the true justice they denied their victims,” he said.