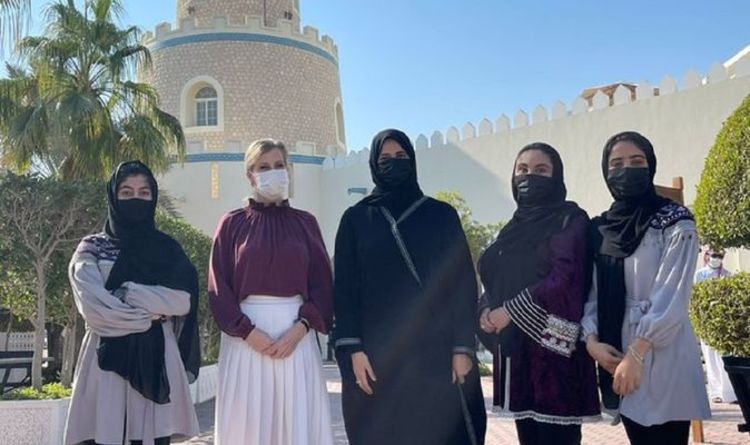 The Countess of Wessex travelled to Qatar to meet members of the Afghan female robotics team who were evacuated from Kabul last year and are continuing their studies in Doha. Sophie was joined by Qatar’s assistant foreign minister, the first to hold the position.

Tweeting a picture of Sophie with the foreign minister and the Afghan robotics team, the Royal Family’s official account wrote: “During The Countess of Wessex’s visit to Qatar, HRH met members of the Afghan female robotics team, who were evacuated from Kabul in 2021, and are continuing their studies in Doha.

“They were joined by Qatar’s Assistant Foreign Minister, the first woman to hold the position.”

The mark the Queen’s Platinum Jubilee this year, Sophie also planted a tree at the British Embassy in Qatar as part of the Queen’s Green Canopy initiative.

“HRH had the opportunity to meet Qatari women who are leaders in their respective fields, including members of the @QBWA, and professionals working in the public sector.”

Sophie – who married Prince Edward in 1999 – has long been an advocate for gender equality.

During her time as a member of the Royal Family, she has used her position to raise awareness of the work being done to help women and girls affected by sexual violence in war-torn countries.

In March 2020, she became the first British royal to visit South Sudan, where she met with survivors.

READ MORE: Meghan urged to speak to police about Andrew ‘if she knows anything’

Andrew is currently embroiled in a civil court case brought against him by one of Jeffrey Epstein’s victims, Virginia Guiffre.

Andrew has vehemently denied all of the accusations made against him but they have seriously marred his reputation.

On Thursday, Buckingham Palace announced Andrew has had his military affiliations and royal patronages removed.

It marks the latest development after Duke of York’s lawyers attempt to have a case brought against him by Ms Guiffre thrown out failed.

A statement from Buckingham Palace read: “With the Queen’s approval and agreement, The Duke of York’s military affiliations and Royal patronages have been returned to the Queen.

He will retain his Duke of York title.

The Duke’s patronages will be distributed among members of the Royal Family.

It comes after outcry from military veterans who penned an open letter to the Queen asking for his honorary affiliations to be removed.