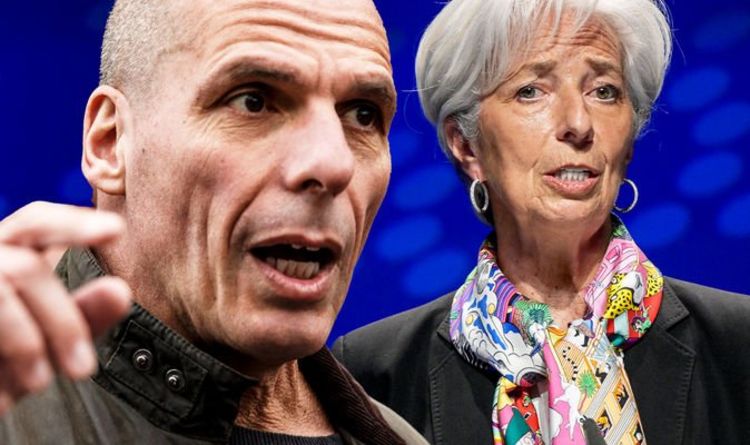 Christine Lagarde unveiled new policy guidance on Thursday that hints at even longer support for the bloc’s struggling eurozone economy, in line with its recent commitment to boost inflation that has undershot the ECB’s 2 percent target for nearly a decade.

Unveiling a new strategy and a tweaked inflation target just two weeks ago, the ECB said that long periods of low inflation would require “especially forceful or persistent” policy support, a hint that stimulus might be kept in place for longer than many had predicted.

The ECB said it expects rates to remain at their present or lower levels until it sees inflation reaching its 2 percent target “well ahead” of the end of its projection horizon and durably for the rest of the projection horizon.

It also said progress in raising underlying inflation should be “sufficiently advanced” to be consistent with inflation stabilising at 2 percent over the medium term.

“This may also imply a transitory period in which inflation is moderately above target,” the ECB said in a statement.

But the announcement was lambasted by former Greek finance minister Yanis Varoufakis who claimed the strategy aims merely at keeping oligarchs in power.

As the euro area government debt reached up to 100 percent of GDP in the first quarter of 2021, he said: “They continue to pretend to uphold to the ridiculous Maastricht rules – an insidious strategy of the EU’s oligarchy to maintain its power to decide who can, who cannot, violate rules impossible to uphold.”

He added: “Notice how the ECB’s predictions are not merely ridiculously wrong.

“No, it is worse: They are INTENTIONALLY wrong; i.e. always predicting that the 2 percent target will be reached.”

The bank earlier promised interest rates would stay at their present or lower levels until the inflation outlook in its staff forecasts “robustly” converged to a level close to the target and underlying inflation dynamics were also showing such an upward trend.

Investors will now look for ECB President Christine Lagarde to unpack this guidance at her news conference and explain the precise implications for interest rates and asset purchases.

But rate hike expectations have already been pushed out since the strategy update and markets see no increase in the bank’s deposit rate until 2024, so Ms Lagarde may seek to conserve those expectations rather than push them out further.

The 1.85 trillion euro PEPP is set to run at least until next March with volumes in the third quarter significantly above levels at the start of the year.

The APP will meanwhile run at 20 billion a month until just before the first rate hike.

The euro traded just off 3-1/2 month lows versus the dollar after the announcement.

At her news conference, Ms Lagarde said: “In our recent strategy review, we agreed a symmetric inflation target of 2 percent over the medium term.

“Our policy rates have been close to their lower bound for some time and the medium-term outlook for inflation is still well below our target. In these conditions, the Governing Council today revised its forward guidance on interest rates.

“We did so to underline our commitment to maintain a persistently accommodative monetary policy stance to meet our inflation target.

“In support of our symmetric 2 percent inflation target and in line with our monetary policy strategy, the Governing Council expects the key ECB interest rates to remain at their present or lower levels until we see inflation reaching two per cent well ahead of the end of our projection horizon and durably for the rest of the projection horizon, and we judge that realised progress in underlying inflation is sufficiently advanced to be consistent with inflation stabilising at two per cent over the medium term.

“This may also imply a transitory period in which inflation is moderately above target.”

She continued: “The recovery in the euro area economy is on track. More and more people are getting vaccinated, and lockdown restrictions have been eased in most euro area countries. But the pandemic continues to cast a shadow, especially as the delta variant constitutes a growing source of uncertainty. Inflation has picked up, although this increase is expected to be mostly temporary. The outlook for inflation over the medium term remains subdued.”