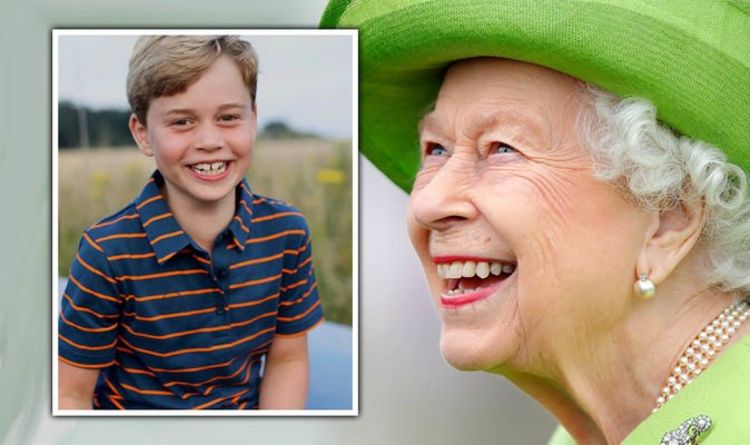 The Queen personally wished Prince George a happy birthday via video link yesterday, according to a source. But the doting great-grandmother didn’t stop there, the source added, as she also surprised the boy with a present.

The source told Us Weekly: “The Queen Zoomed Prince George to wish him a happy birthday.

“She sent him a lovely gift as a surprise.

The bond between the Queen and the third in line to the throne is strong, the source suggested, as they added Prince George “loves his great-grandmother so much.”

On Prince George’s birthday, the Queen also publicly marked the big day with a message shared on the Royal Family Twitter account.

READ MORE: Meghan and Harry’s pledge to the Queen ‘gone down the drain’

The message included a new portrait of the little Cambridge shared on the evening before by Kensington Palace.

In the snap, the eight-year-old wore a £10 John Lewis striped polo shirt and a pair of blue shorts.

The beaming royal posed by sitting on the bonnet of a Land Rover Defender against the backdrop of a field.

The choice of including a Land Rover in the snap of the third in line to the throne can be interpreted as a tribute to the late Prince Philip, who regularly drove vehicles by the British 4×4 brand and even asked to use an adapted Defender as a hearse for his funeral.

The photograph was taken by Kate, Duchess of Cambridge, at Anmer Hall earlier this month.

Kate has treated royal fans with pictures of her children released ahead of their birthdays and special occasion since she first became a mum.

Her love for photography is well known – and even inspired one of her most successful initiatives, the Hold Still contest.

This initiative saw thousands of people submitting their snaps depicting life in Britain during the first national lockdown.

The project was carried out in collaboration with one of Kate’s patronage, the National Portrait Gallery.

The 100 pictures of the finalists hand-picked by a panel of experts were exposed across the country on billboards and, in May, were included in a book.

However, Kate’s love for taking pictures has sometimes left her loved ones exhausted.

During a phone call with a Hold Still finalist, Ceri Edwards, which was published on the Duke and Duchess of Cambridge YouTube channel, Kate discussed the power of photography.

The Duchess asked if Ms Edwards’ husband was a photographer, to which she said: “No. Well, Mark would say otherwise just because I do take a lot of pictures of the family.”

Ms Edwards responded: “I know, but I love it. I love looking back.

“I think when you have children, time seems to go into warp speed, really, and it’s just a lovely thing for me.

“You look back and see how much the children have grown.”