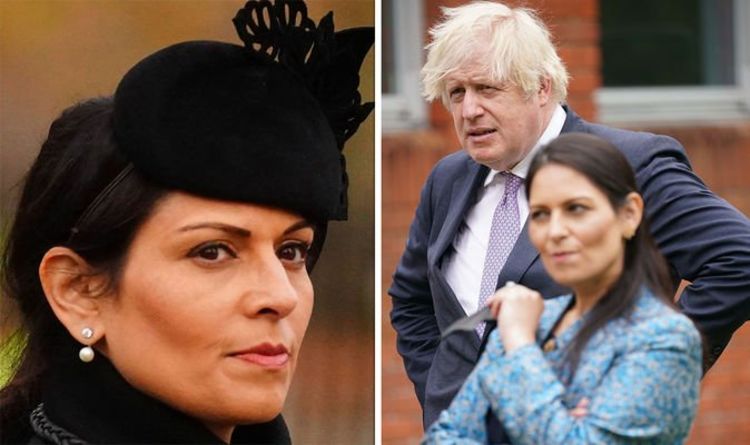 Ms Patel became the latest Cabinet minister to throw her weight behind the Prime Minister yesterday as she pledged her “support” amid calls for him to resign. Her intervention came after Mr Johnson admitted he attended a “bring your own booze” event at Number 10 during England’s first national coronavirus lockdown. The Tory leader apologised over the event in House of Commons on Wednesday but claimed he did not realise it was a party and thought it “was a work event”.

More than 100 Downing Street staff were invited to the event, which was attended by around 30-40 people.

The event, held in May 2020, is now being investigated by civil servant Sue Gray to see if it broke England’s Covid rules at the time, including a limit meaning people could only meet up socially with one other person outside their household.

Ms Patel was asked by Sky News on Thursday if she was going to wait for the outcome of Ms Gray’s report before commenting on the matter.

The Home Secretary replied: “No! On the contrary.

“I have publicly supported the Prime Minister and actually you’re speaking to the Home Secretary who spends all my time day in, day out supporting the Prime Minister, his agenda of delivering on the people’s priorities and the work that we do.”

JUST IN: BBC QT: ‘Why do we care?’ Wokeism blasted as ‘out of control’ after sweet renaming

However, her comments contrast sharply to the warning she gave in September 2020 that she would “call the police” if she saw her neighbours breaking the Covid rules by, for example, having a party.

Ms Patel spoke to Kay Burley about her response to people flouting England’s six-person limit on gatherings at the time.

She said: “I’m rarely at home but if I saw something that I thought was inappropriate then, quite frankly, I would call the police.

“It’s not dobbing in neighbours, it’s all about us taking personal responsibility.”

Ms Patel said that if there was a “big party taking place” then “it would be right to call the police”.

The paper reported that staffers drank and danced into the night at the two events the night before the Queen said goodbye to Philip.

Her Majesty attended the Duke of Edinburgh’s funeral the next day, with a heartbreaking photo capturing the monarch sitting alone in black as she was socially distanced from the rest of her family.

One of the events in Downing Street was held for Mr Johnson’s outgoing director of communications James Slack, while another was for one of the Prime Minister’s personal photographers, who was also leaving.

Today, a Downing Street spokesperson apologised to the Queen, saying it is “deeply regrettable that this took place at a time of national mourning”.

Mr Slack, who is now deputy editor of The Sun newspaper, also apologised for the “anger and hurt” caused by the party, saying it “should not have happened at the time that it did”.

People in England were only allowed to socialise in groups of up to six people or two households at the time.