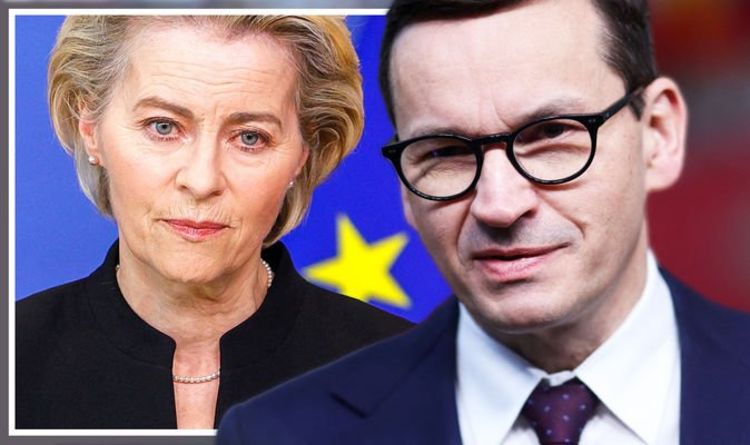 The EU’s Fit for 55 directive package aims to help increase the goal for reducing emissions across the bloc from 40 to 55 percent by 2030. It involves a set of initiatives including a review of the bloc’s gas-market rules. It also includes a proposal to improve buildings’ energy performance, a green mobility package, and measures to address the social aspects of the climate transition. But this comes at a huge cost for Poland, who have been left furious.

In fact, Polish taxpayers will have to fork out €338billion (£282.40billion) just to achieve the currently enacted EU Fit for 40 regulations (emission reduction of 40 percent by 2030).

Most of this comes from energy sector investments and the raising of energy effectiveness in households.

A third factor is the EU Emissions Trading System (ETS) which costs over €33billion (£27.57billion).

The ETS sets an absolute limit or cap on the total amount of certain greenhouse gases that can be emitted each year by the entities covered by the system.

This cap is reduced over time so that total emissions fall.

Pekao analysts worked out that the introduction of an even heavier version of the existing climate package will raise the total cost up to €527.5 billion (£440.79billion).

The differences in the prices of the two packages amount to close to €190 billion and are caused mainly by increases in the cost of the ETS.

But while the new package comes at a huge cost for Poland, the experts tipped that it would help the country generate more income, which is estimated to reach €220billion (£183.84billion).

Some of that income would come from the EU Recovery Fund.

And according to DGP sources, the calculations of Pekao experts were discussed at an informal government session in December 2021.

The report is said to have sparked a heated debate.

DGP said: “The EU’s climate policy is one of the main points of conflict within the United Right, and especially between Solidarity Poland and the factions focused around Mateusz Morawiecki, (Poland’s Prime Minister).”

This comes as tension has been bubbling between Poland and the EU.

This is because Poland’s Constitutional Tribunal ruled that elements of EU law were incompatible with the Polish constitution.

This sparked fury among EU chiefs.

President of the European Commission Ursula von del Leyen slammed the Polish court’s attack on the primacy of EU law.

This ranged from legal action to a cut in funding and suspension of voting rights.

Ms von der Leyen called it “a direct challenge to the unity of the European legal order”.