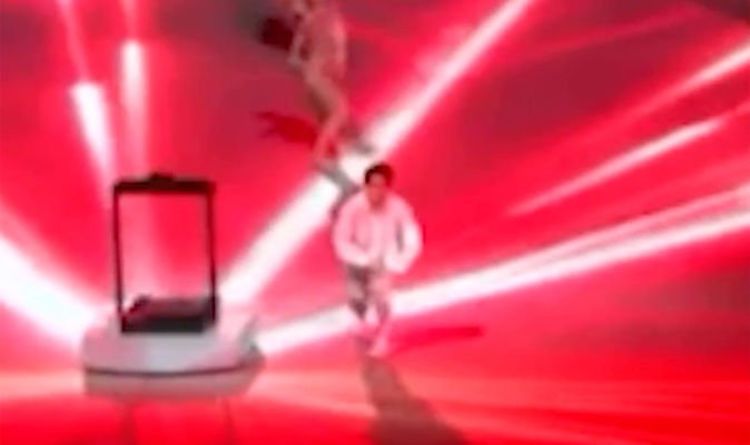 Eagle-eyed viewers noticed that the Tokyo Olympics 2020 broadcaster dramatically cut away when one Japanese athlete appeared to “take the knee”. Japan officially kicked off its long-delayed 2020 Tokyo Olympics earlier today. At one point, Arisa Tsubata, 27, was performing during the opening ceremony of the Olympic Games when she knelt down.

Ms Tsubata is a Japanese boxer who famously worked as a nurse on the frontlines of the Covid pandemic.

She later lost her chance to compete at the Tokyo Olympics because of the virus.

During the opening ceremony, she ran alone on a treadmill in front of a virtually empty Olympic stadium, while dancers performed around her.

She spent five minutes on the treadmill in what was a particularly stripped-back and sombre opening ceremony.

JUST IN: US President claims you won’t get Covid if you have the vaccine

There were just 950 VIPs and world leaders inside the 68,000-seat main arena in Tokyo on Friday night amid rising case totals in the country.

Spectators and dignitaries, led by Emperor Akihito, observed a moment’s silence for those who died in the pandemic.

Viewers spotted the awkward camera cut away during the ceremony that was being watched by millions worldwide.

One viewer wrote: “I thought my eyes were playing tricks on me.”

There was controversy earlier this week after it first emerged that Tokyo Olympics social media teams were banned from sharing posts of athletes taking the knee.

However, the International Olympic Committee and Tokyo 2020 organisers later backtracked on this stance.

Team GB sprinter Dina Asher-Smith had said that stopping athletes from taking the knee in Tokyo would be “completely unenforceable”.

However, one former British Olympic star argued that the Olympics were not the right place for athletes to get on their “soapboxes”.

Fatima Whitbread said the Games should be free of “people expressing how they feel” and “creating a divide”.