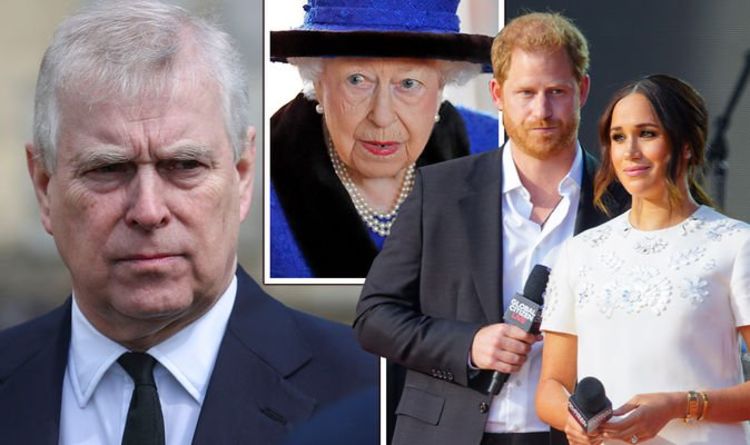 The Duke of York, like the Duke and Duchess of Sussex after they quit the Firm, has kept the HRH style but will not use it in an official capacity anymore. A Palace source claimed Her Majesty has in fact followed Megxit as a template to remove her youngest son from royal life.

The Queen’s approval, the sources said, came in a bid to “insulate the institution from being hit by all the shrapnel that is flying around” as Andrew prepares to fight a civil lawsuit brought by Virginia Giuffre, formerly known as Virginia Roberts.

Prince Andrew’s lawyers had tried to have the sexual assault lawsuit against him thrown out but a US judge rejected the attempt on Thursday.

Ms Giuffre accuses Andrew of committing “sexual assault and battery” upon her when she was a teenager – claims the Duke vehemently denies.

Hours after it emerged the Duke of York, 61, will face a civil sex case trial later this year, Buckingham Palace broke the silence.

It said in a statement: “With the Queen’s approval and agreement, the Duke of York’s military affiliations and Royal patronages have been returned to the Queen.

“The Duke of York will continue not to undertake any public duties and is defending this case as a private citizen.”

All of Prince Andrew’s roles were returned to the Queen with immediate effect.

It has been claimed they will be redistributed to other members of the Royal Family.

Buckingham Palace said at the time the new arrangement meant the couple were “required to step back from royal duties, including official military appointments” and would no longer receive public funds for royal duties.

Harry lost his position as Captain-General of the Royal Marines – which he had inherited from Prince Philip, Duke of Edinburgh — and gave up all his honorary military titles.

The Queen made a statement back then saying that following “many months of conversations and more recent discussions” she was “pleased that together we have found a constructive and supportive way forward for my grandson and his family”.

The 95-year-old has not yet spoken out about the decision on the Firm’s relationship with Andrew.

A source said: “She has the ability when push comes to shove, to know what is best for the institution and will act in her role as head of state, not a mother.”

Speaking to the Mail, they added: “She loves Andrew and this doesn’t mean he is no longer her son. But a decision had to be made as it was overshadowing everything the family did and her forthcoming platinum jubilee.

“Everyone will be feeling very relieved he has finally been cut adrift. It may even help him to have more clarity in fighting the case.”