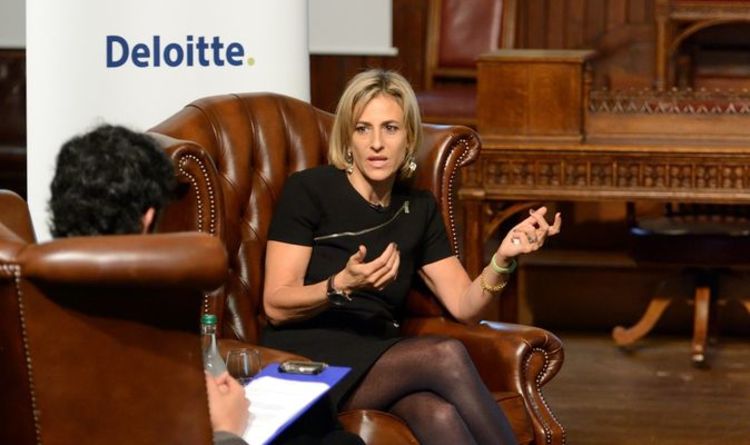 The statement was issued after Maitlis suggested the Beeb received pressure from Downing Street following her 2020 report on Dominic Cummings. The BBC said on Thursday: “Nothing is more important than our impartiality. All BBC journalists must abide by the BBC’s editorial guidelines and social media rules.

“There are no exceptions. We will be taking this up with Emily.”

Maitlis, who has been at the BBC since 2001, remarked about Boris Johnson’s disgruntled former adviser, Dominic Cummings, over his decision to break lockdown rules on his trip to Barnard Castle.

After her Newsnight show aired last summer, the BBC received more than 23,000 complaints regarding her Cummings report.

The broadcaster then issued an apology less than 24 hours later.

Maitlis told viewers: “Dominic Cummings broke the rules. The country can see that and it’s shocked the Government cannot. The longer ministers and the PM tell us he worked within them, the more angry the response to the scandal is likely to be.”

Her report continued: “He was the man, remember, who always ‘got’ the public mood, who tagged the lazy label of ‘elite’ on those who disagreed. He should understand that public mood now: one of fury, contempt and anguish.”

In an interview with the Press Gazette, Maitlis stood by her report on the Vote Leave man and said she “did not regret” her words.

“It hasn’t ever been explained to me what was journalistically inaccurate about that,” she added.

Mr Cummings, who has since left No10, hit the headlines again this week over his interview with the BBC’s Laura Kuenssberg.

He claimed there had been talk of removing Mr Johnson from No10 within weeks of his December 2019 election victory.