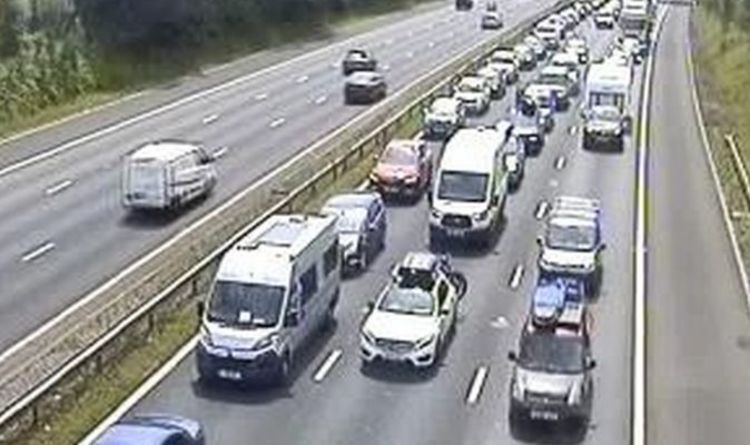 Traffic monitoring system Inrix has reported heavy traffic on M5 close to the Devon-Somerset border following a crash. there are severe delays on the motorway, with over 90 minute waits on both sides of the carriageway. Severe delays due to holiday traffic in both directions between J25 A358 (Taunton) and J15 M4 J20 (Almondsbury Interchange) were already reported.

As of 4:08, the crash is cleared but delays are ongoing due ti “holiday traffic”.

“Delays due to ongoing holiday traffic.”

An Inrix alert about the accident said: “M5 Northbound partially blocked, heavy traffic due to accident between J27 A361 (Tiverton) and J26 A38 (Wellington).”

On traffic elsewhere on the M5, they said: “Severe delays due to holiday traffic on M5 in both directions between J25 A358 (Taunton) and J15 M4 J20 (Almondsbury Interchange).

“Congestion to the M49 at J18 and between J15 and 16 soutbound for an earlier broken down vehicle. Travel time is 1 hour 30 minutes Northbound, Southbound 1 hour 40 minutes.

“Traffic congested in patches especially around Taunton, Bridgewater and Bristol.”

It comes as RAC spokesperson Simon Williams said roads will likely be busier than normal for the next few weeks.

The RAC estimates more than 11 million motorists will make trips this weekend – with Friday expected to be the busiest of the three days.

He said: “With the current heatwave, the scene is really set for an incredibly busy few weeks on the country’s roads, whether that’s on motorways or on smaller, minor routes that take people to popular tourist destinations by the coast or in the countryside.

“It’s never been more important to plan ahead to avoid the busiest times. With the roads likely to be so busy, we’re expecting the numbers of people needing our help to rocket, but it’s not too late to reduce your chances of breaking down.”