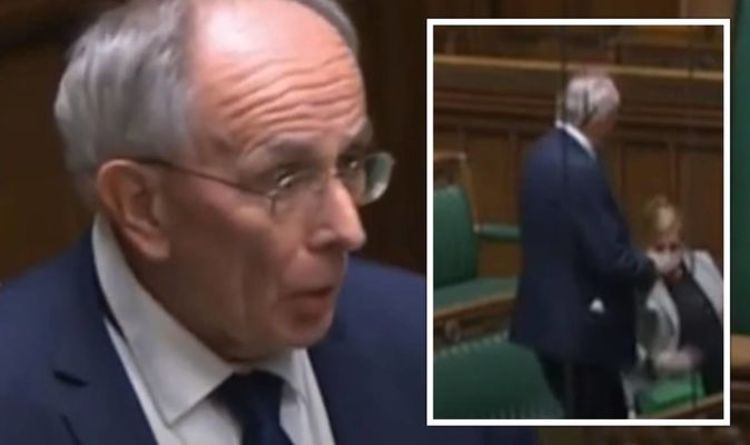 Peter Bone began his nearly 20 minute reading of his Private Members’ Bill in the House of Commons which looked at the “provisions” made if Boris Johnson or other future prime ministers were “incapacitated” from their duties. But as Mr Bone went on his lengthy reading, a phone responded to his voice which stunned the MP and confused Deputy Speaker Eleanor Laing who wondered why he had stopped. Mr Bone joked that the “Chinese got in again” before Ms Laing firmly reminded MPs to switch off their phones during the session.

Speaking in the House of Commons, Mr Bone laid out the details of his bill which include giving the role of prime minister, including their salary, to a nominated secretary of state who would take over if the PM was unable to do their job.

But as Mr Bone clarified that his bill did not prevent the Queen from appointing a prime minister he was interrupted by someone’s phone which could be heard saying “One moment”.

Mr Bone joked: “Did I hear the Chinese had gotten in again?!”

The Commons laughed at the outburst with Ms Laing telling Mr Bone if a heckle was heard then could it be “repeated or ignored”.

In his proposed bill, Mr Bone is calling for: “The office of Prime Minister and First Lord of the Treasury shall, in the event of the temporary or permanent incapacitation of the person holding such office, be conferred upon another Secretary or Minister of State.”

The bill will be presented again on January 21.

In an email to MPs the Speaker said: “I am writing now to draw your attention to the attached Interference Alert issued by the Security Services, MI5, about the activities of an individual, Christine Lee, who has been engaged in political interference activities on behalf of the Chinese Communist Party, engaging with Members here at Parliament and associated political entities, including the former APPG: Chinese in Britain.

“I should highlight the fact that Lee has facilitated financial donations to serving and aspiring parliamentarians on behalf of foreign nationals based in Hong Kong and China.

“This facilitation was done covertly to mask the origins of the payments.

“This is clearly unacceptable behaviour and steps are being taken to ensure it ceases.”