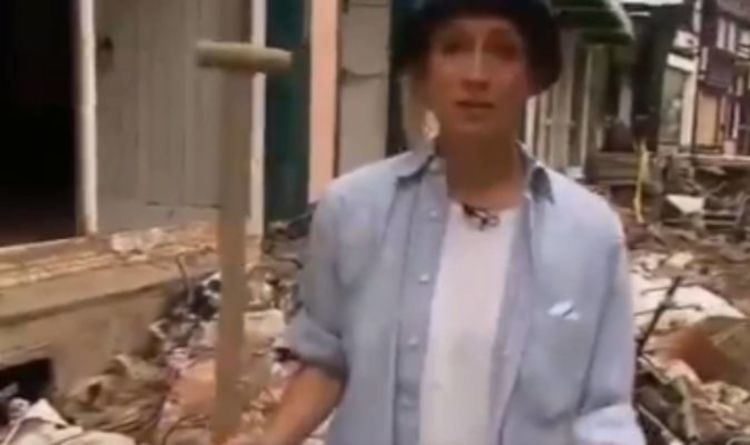 RTL reporter Susanna Ohlen was caught out when footage of her smearing mud on her clothes and face was posted online after she delivered a news report where she claimed she had helped in flood cleanup efforts in Germany. But an onlooker filmed Ms Ohlen before she delivered her report and caught her not helping out but also putting mud on her face and shirt so it looked as if she had.  Bad Munstereifel town, where Ms Ohlen was reporting from, saw heavy flooding which has claimed at least 128 lives as the country grappled with the violent weather.

Ms Ohlen delivered a report from the town where she wore wellies, a hat and equipped a shovel as she pretended she had helped tackle the damage.

But a video shared online which has been seen over 280,000 times showed the reporter bend down and smear mud on her face before bending down again to smear more on her clothes.

Ms Ohlen turned to her film crew to talk to them as the person filming her could be heard laughing at her.

The journalist also shared a tribute to the town on her Instagram where she urged others to get involved and help out with the cleanup effort.

She wrote online: “Everyone lends a hand here, grabs a shovel. If you have a shovel at home, a wheelbarrow too, come here and get in touch.”

“It hits me a bit more intensely because we have a holiday home here, two kilometers away, thank God there is nothing, but of course, people stand together here, you help each other.”

RTL, upon learning about the video, published a statement and revealed she had been fired from her role.

France, Germany, and parts of Belgium and the Netherlands were hit with torrential rainfall which led to floods in towns and cities.

In Germany, a total of 177 people have been confirmed dead with a further 32 people in Belgium.

Hundreds are still missing as many fear the death toll will rise over the next week as cleanup efforts get underway.

Germany approved a £340million package to help those who have been affected by the devastation.

Chancellor Angela Merkel said the damage has been “immense” and told reporters the country would need a “long time” to carry out repairs.