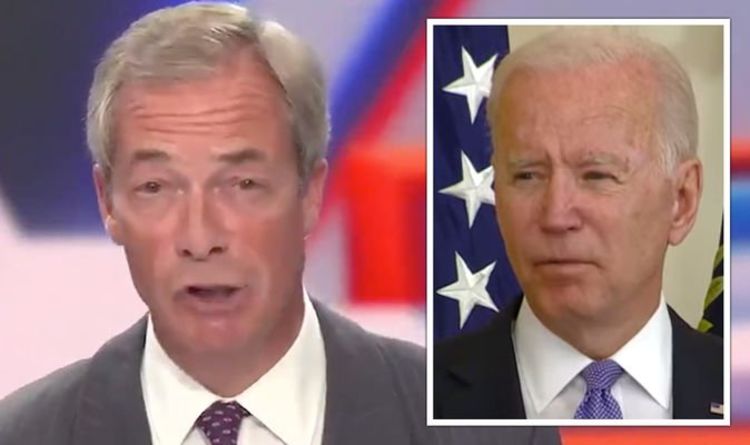 Nigel Farage hit out at the US President after the White House confirmed Joe Biden had sought reassurances from Moscow about the controversial Nord Stream 2 gas pipeline. The GB News presenter faced repeated accusations of collaborations with Russia in the aftermath of the Brexit referendum and admitted his surprise at the change in President Biden’s stance. Mr Farage said: “Remember the Russia hoax?

“Donald Trump was only elected because of Russian interference and that went on, and there was the big Mueller investigation into him.

“It must’ve been the Russian, it’s the only way Trump could possibly have won. And on this side of the Channel, of course, Brexit – ah yes, it was the Russians who founded Brexit.

“And in particular people like Arron Banks and myself. Indeed, Hillary Clinton said publicly that Nigel Farage was founded by the Russians. Those awful Trumpists and eurosceptics are all in bed with Russia.

“Well, it turns out that the boot is on the other foot.”

JUST IN: Sturgeon poised to deliver ‘Brexit payback’ for EU with independence: ‘UK in turmoil!’

Mr Farage continued: “It’s Mrs Merkel who’s made Germany increasingly dependent on Russia for gas and there is the proposed Nord Stream 2 pipeline from Russia into Germany.

“And guess what? Joe Biden’s administration have now done a U-turn for the USA. They’ve backed the deal, they sought some assurances from Russia over the integrity of the Ukraine.

“The truth is all those who screamed foul over Russia, it’s actually the Democrats in the USA, the Remainers in the United Kingdom and the globalists, they’re the one, actually, who are enthralled to Putin.

READ MORE: Maitlis in hot water over Cummings remark as BBC warns ‘no exceptions’ to impartiality

Despite long-standing US objections to the project, the Biden administration concluded that it was too advanced to stop. Germany, which strongly backs the pipeline, and the United States announced on Wednesday what amounted to a truce over the pipeline.

Under its terms, Berlin pledged to respond to any attempt by Russia to use energy as a weapon against Ukraine and other Central and Eastern European countries.

Chancellor Merkel said on Thursday she had secured Russian assurances that Moscow would not use the pipeline as a weapon but that Berlin was ready to react with sanctions if it did so.

She said: “After all, we are not without any tools to do something,”

Kiev had wanted the project stopped altogether and had cited Russia’s 2014 annexation of the Ukrainian region of Crimea and its backing for pro-Russian separatists in a conflict in eastern Ukraine as grounds for not trusting Moscow.

Mr Kuleba said: “There is a fundamental problem … it is still unclear to us whether Russia is ready to fulfill its obligations and its part properly when it comes to the energy security of Ukraine and the preservation of Ukraine’s role as a transit state,

Ukraine has started official consultations with the European Union and Germany about Nord Stream 2.