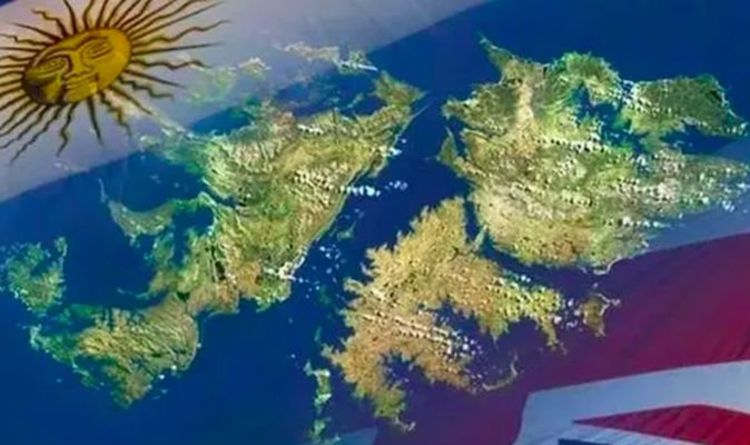 Using the slogan “The Malvinas are Argentine’”, the government warned “actions will be taken to disseminate and raise awareness of Argentina’s sovereign rights”. Buenos Aires said it would also be a year “of homage of the Argentine people to the fallen in Malvinas” as part of commemorations to mark 40 years since the end of the war, which was sparked when Argentina invaded in 1982, leaving around 650 Argentine soldiers and 255 British dead.

The Argentinian government called for dialogue with the British over the island.

An official decree read: “Throughout all democratic governments and in a constant manner, Argentina has rejected the use of force and has shown itself to be continuously willing to engage in bilateral negotiations as a means to reach a peaceful solution to the dispute, in accordance with the Resolutions of the United Nations General Assembly and the principles of International Law.

“In this context, it is necessary to carry out awareness-raising actions, both at the national and international levels, to make Argentina’s sovereign rights with respect to the Question of the Malvinas Islands visible within the framework of the First Transitory Provision of the National Constitution, as well as to pay tribute and honour our fallen soldiers and their families.

“On the other hand, it cannot be overlooked that the reaffirmation of Argentine sovereignty over the archipelagos, the call for the resumption of dialogue and negotiations with the United Kingdom of Great Britain and Northern Ireland, the ratification of the commitment of Argentine democracy to peaceful means for the resolution of disputes and respect for international law are central axes of the National Government.”

The two historic foes have been embroiled in a long-running diplomatic spat over the islands, which have been under British control since 1833.

Argentina’s 1982 invasion sparked a war which left around 650 Argentine soldiers and 255 British dead.

Britain won, but tensions have remained over the Island’s sovereignty ever since.

It comes after a a former RAF captain told Express.co.uk Argentina’s claim was “illegitimate”.

Mr Shields, international relations expert at Cambridge University, said: “I would have been far more surprised if there hadn’t been anything coming out of Argentina but it’s ultimately politics.

“I would expect the Argentinian government to be making some noise on this anniversary.

“Their claim has certainly no more legitimacy than it in 1982 if not indeed less – the world opinion in the aftermath of 1982 was back the British.“I think in the court of global public opinion and global international politics, the Argentinian claim can be dismissed.”