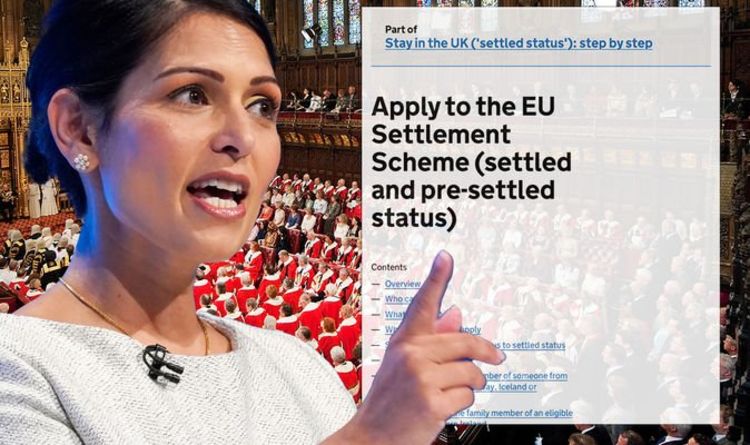 More than 5.4 million applied for the Home Office scheme which seeks to ensure EU nationals living in the UK post-Brexit receive residency rights. The number is far higher than originally anticipated.

Settled status is available to anyone who has been living in the UK continuously for a five-year period.

The EU Ambassador to the UK, João Vale de Almeida, has praised the scheme as “very good, even excellent, and went beyond our expectations”.

But now a House of Lords committee has warned EU pensioners in the UK could be at risk of losing their rights due to shortfalls in the scheme.

Peers have argued only a small percentage of applications are from over-65s and risk losing their rights and benefits if the situation is not rectified.

The report from the European Affairs committee warns: “We are concerned by the low proportion of applications from older EU citizens, who are more vulnerable to digital exclusion.

“Just two percent of all applications to the Settlement Scheme are from over-65s.

“Some witnesses suggested that this may indicate low take-up.

“We call on the Government to explain whether it shares these concerns, and if so, what steps it intends to take to ensure that over-65s are supported in making late applications.”

It adds: “The best way to protect the rights of the vulnerable is to ensure protections are in place for late applicants.

“While we welcome the inclusion in current Home Office guidance of a number of vulnerabilities as potential ‘reasonable grounds’ for late applications, we remain concerned that these protections may not be sufficient.”

The department has also pledged to work with anyone eligible who failed to apply before the July 1 deadline and to help support them in submitting a late application.

If 28 days after being contacted about not having settle status an EU national living in the UK has still not made an applications, they may be liable to enforcement action, including deportation.

The spokesman added: “Whether such action is taken will be determined in accordance with immigration enforcement policy guidance relating to those in breach of immigration law and following a careful assessment of the individual’s circumstances.”

Peers also warned the digital-only approach for the scheme means elderly people who may rarely use technology could be penalised.

It is not possible to prove settled status via a physical document.

The report says EU citizens in the UK may face discrimination in securing employment and rental tenancies if they struggle to operate the digital pass.

Express.co.uk has asked the Home Office for its response to the committee’s report.