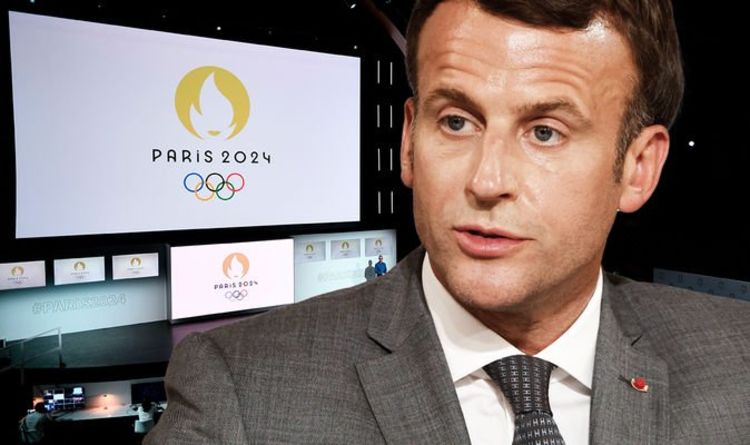 French President Emmanuel Macron is in Tokyo today for the opening ceremony of the 2020 Olympic Games. He is one of just a handful of foreign dignitaries in the Japanese capital for the event after organisers stripped back the usually lavish affair and limited attendance. Only around 950 people will be in the stands, including US First Lady Jill Biden, who arrived in Tokyo on Thursday night.

Mr Macron’s trip to Japan will also include a reception with Emperor Naruhito and talks with Prime Minister Yoshihide Suga.

France is preparing to host the 2024 games, and it could prove to be one of the lasting legacies of Mr Macron’s presidency.

But the French President expressed big concerns in 2019 as he admitted some of the poorest districts of Paris were failing to see the benefits of the successful bid.

He said: “At the moment, we are not meeting the goals we should have for the parts of the Paris region that are most affected by this big event.

“It is clear that the region, and above all Seine-Saint-Denis because it will be most affected by several big new venues, is not getting a fair return.

“So we are going to work on it because for now, I’m not happy.”

The district of Seine-Saint-Denis is planned to be at the very heart of Paris’ games – it is a region blighted by the some of the highest poverty and crime rates in France.

It is home to the famous Stade de France, which will undergo a huge redevelopment while a new aquatics centre will also be built.

Many people who live in the Seine-Saint Denis were also furious, hitting out at Mr Macron’s comments.

Clement Remond, the vice president of sports body FSGT said: “I think it’s a bit much for the president to come out with this. At the moment, it’s the state that is not taking care of things.”

The president of Seine-Saint-Denis, Stephane Troussel, was also scathing about Mr Macron’s comments.

He said: “The heritage of the Olympics is a battle I have been fighting for months… to try to encourage the state to do more.

“I say to him (Macron), better later than never.”

Tony Estanguet, the former Olympic canoeing champion who heads the Paris 2024 organising committee, said he welcomed “the ambition that the head of state has reaffirmed”.

He added: “We will obviously be able to go further in helping people with a state that is highly motivated at our side.”

Mr Macron made the comments as he toured the country as part of his national debate, which he launched in response to Yellow Vest demonstrations in France.

The Yellow Vests is a populist movement campaigning for economic justice that began in France in October 2018.

They have become notorious for huge protests in Paris which are still occurring today.

The movement saw demonstrators hit out at fuel taxes initially, but this anger broadened to other issues.

Tokyo 2020 has commenced with its own problems.

Kentaro Kobayashi, a popular entertainer in Japan who directed the opening ceremony which will take place tonight, was sacked this week after a video clip resurfaced online of a skit in which joked about a game he called “let’s play massacre the Jews”.