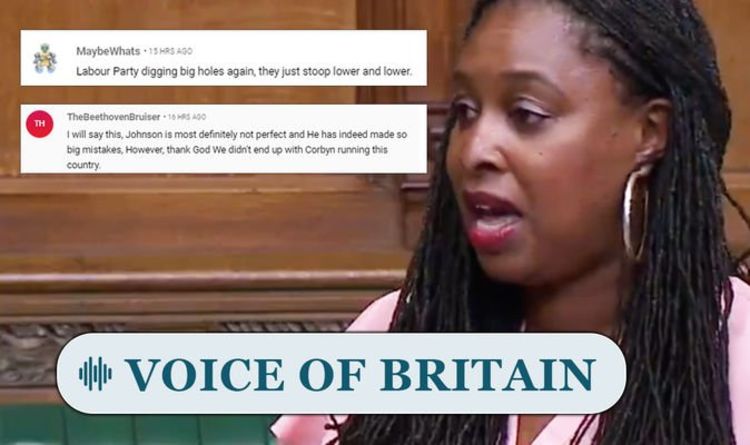 The leftwing MP was removed from the House of Commons on Thursday after she refused to retract her remarks accusing the Prime Minister of misleading MPs. The Brent Central MP, who is part of the Socialist Campaign Group of Corbynista MPs, claimed past statements on economic growth, nurses’ bursaries and investment were proof the Prime Minister had mislead MPs. Following Ms Butler’s ejection from the Commons, Express.co.uk readers reacted with fury over her comments.

One person said: “Corbyn’s nodding dog I seem to remember from PMQs.”

A second said: “I will say this, Johnson is most definitely not perfect and he has indeed made so big mistakes.

“However, thank God we didn’t end up with Corbyn running this country.”

A third said: “She’s Labour at its best.”

In the Commons, Ms Butler said the Prime Minister had “lied” on repeated occasions throughout the pandemic.

Her comments immediately drew groans from some in the Commons before she left the Chamber.

Ms Butler said: “The Prime Minister said we have severed the link between infections and series disease and death.

“That the Prime Minister has lied.”

After refusing twice to retract her words, Ms Butler was asked to leave the Chamber.

Under Parliamentary rules, MPs are not allowed to accuse their colleagues of lying in the House of Commons.

After the incident, Ms Butler was quickly supported by Angela Rayner, Deputy Leader of the Labour Party and Shadow First Secretary of State.

Ms Rayner said in a tweet: “Just to confirm Boris Johnson is a liar regardless of who calls him a liar or where they call him a liar.”

“Nothing wrong with calling out liars in Parliament!”