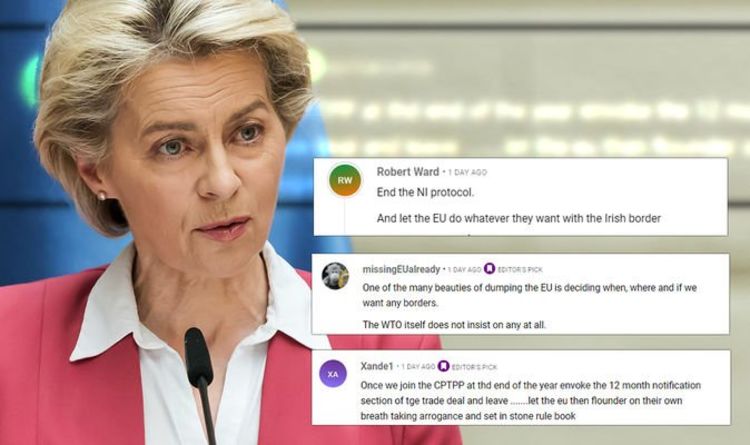 The plans put forward would equate to a full renegotiation of the Northern Ireland Protocol, which was agreed as part of the 2019 Brexit Withdrawal Agreement.

Mr Johnson reportedly urged Brussels to carefully consider the plans that had been put forward.

However, Ms von der Leyen said the EU “will not renegotiate” the withdrawal agreement.

She said: “The EU will continue to be creative and flexible within the Protocol framework. But we will not renegotiate.

“We must jointly ensure stability and predictability in Northern Ireland.”

But now, Express.co.uk readers have demanded Mr Johnson tear up the entire agreement and claimed the border issues between Northern Ireland and the Republic were the EU’s problems.

One Express.co.uk reader said: “One of the many beauties of dumping the EU is deciding when, where and if we want any borders.

“The WTO itself does not insist on any at all.”

“EU is the past and in decline, everyone knows this accept Europe to busy tangled in their red tape.

“CPTPP is the future and EU knows it, EU backed into a shrinking corner lashing out like a wounded animal.”

Someone else Mr Johnson should “end the Northern Ireland Protocol” and let the “EU do whatever they want” with the Irish border.

A fifth reader commented: “EU is not interested in finding a solution when they have purposely gone out of its way to instigate the friction in the first place.

“The only option now is to tear up the WA.”

Someone else said: “The EU is too scared to manage its own exterior border so offloads it onto us.

“It’s their border so their problem Boris.”

Another person said the border issues is “entirely” the EU’s problem.

They said: “The WTO does not insist on a border so we don’t need to have one.

“The EU must have one to protect itself – so clearly the border problem is entirely theirs.”