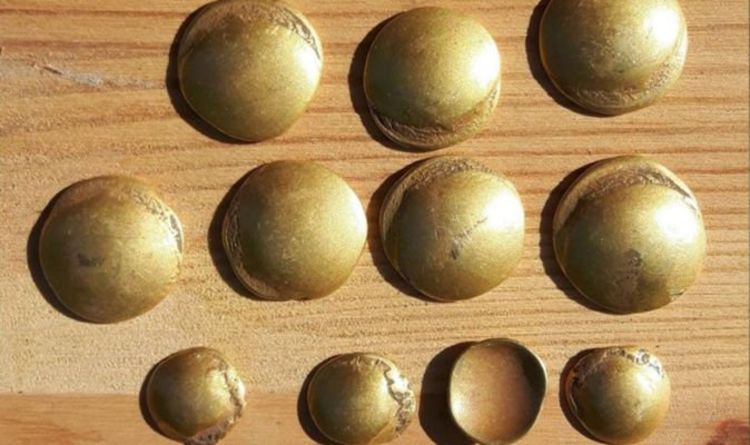 A volunteer archaeologist stumbled upon the stunning hoard, the value of which “must have been immense”. Manja Schüle, the Minister of Culture in Brandenburg announced in December 2021 that the 41 gold coins are the first known gold treasure to have been discovered in Brandenburg. The coins are curved, a feature that inspired the German name “regenbogenschüsselchen”. This translates to “rainbow cups”.

There is a Celtic myth that rainbow cups were found where a rainbow touched the Earth, just like the mythical concept that leprechauns can be found there with a pot of gold.

Marjanko Pilekić, is a numismatist and research assistant at the Coin Cabinet of the Schloss Friedenstein Gotha Foundation.

He said that another tale about the rainbow cups is that they “fell directly from the sky and were considered lucky charms and objects with a healing effect”.

Wolfgang Herkt, was the volunteer archaeologist who discovered the hoard.

He was volunteering for the Brandenburg State Heritage Management and Archaeological State Museum (BLDAM) back in 2017.

When Mr Herkt got a landowner’s permission to search a local farm, he spotted something shiny and gold.

Mr Pilekić said: “It reminded him of a lid of a small liquor bottle.

“However, it was a Celtic gold coin.”

Mr Herkt reported his discovery to the BLDAM, having found 10 gold coins.

BLDAM archaeologists then brought the total up to 41 gold coins.

These include what is now England, France, Belgium, Switzerland, Austria, southern Germany and the Czech Republic.

Mr Pilekić said that in southern Germany, “we find large numbers of rainbow cups of this kind”.

But the Celts did not live in Brandenburg.

That is why the discovery suggests that Iron Age Europe had extensive trade networks.

Because the coins in the stash are similar, it’s likely that the hoard was deposited all at once

Mr Pilekić said: “It is rare to find gold in Brandenburg, but no one would have expected it to be ‘Celtic’ gold of all things.

“This find extends the distribution area of these coin types once again, and we will try to find out what this might tell us that we did not yet know or thought we knew.”